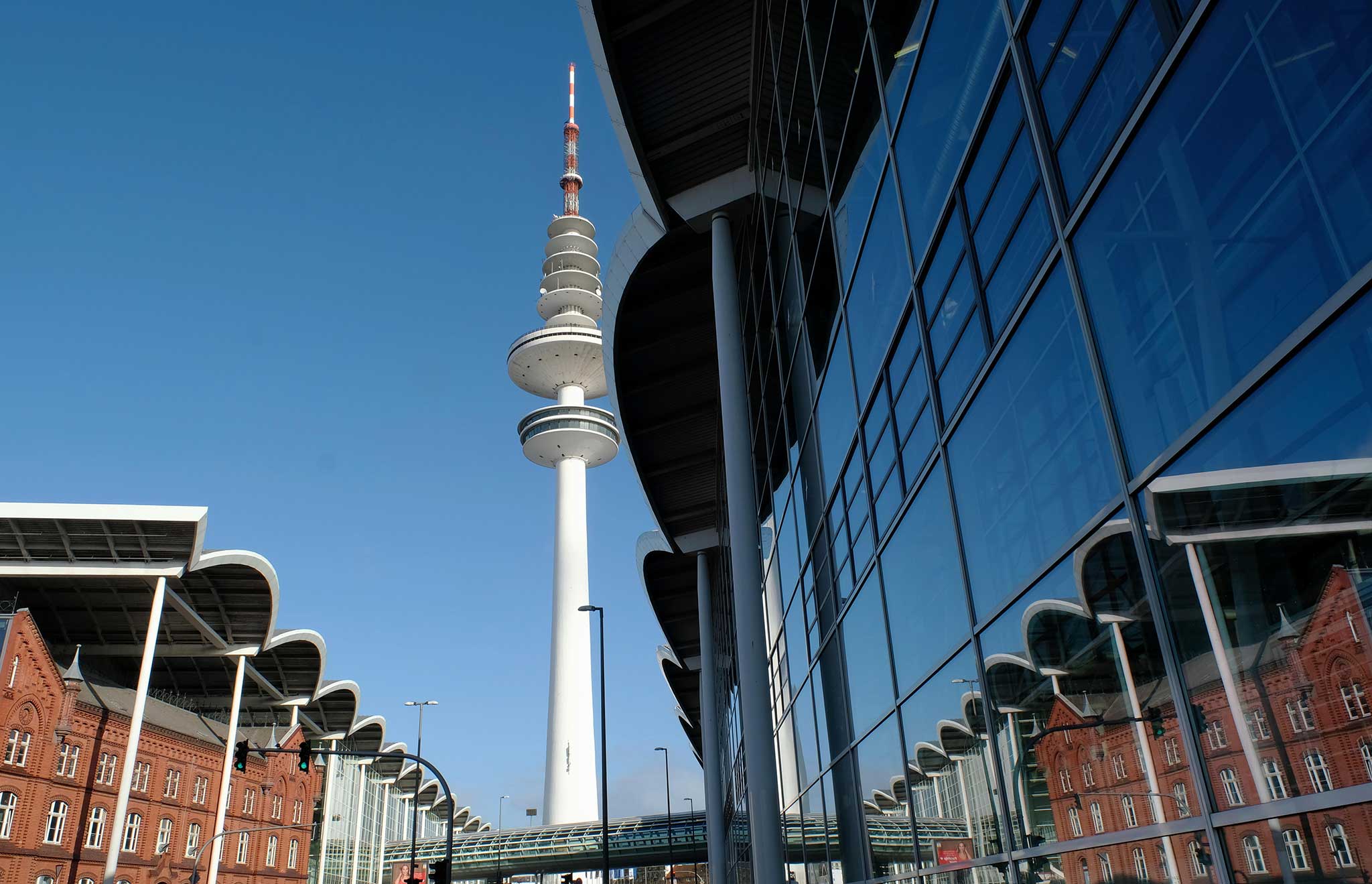 The tallest building of the Hanseatic city finds itself in the direct vicinity of the Hamburg exhibition halls: with its 276.5 meters, the TV Tower – which was opened in 1968 – quickly became one of the most popular places to visit in Hamburg and bears the nickname “Telemichel”. In addition to the sensational vistas of the city, the unique rotating restaurant on the 13th floor proved to be a magnet for visitors. But the Heinrich Heinz Tower – the official name – was built as neither a restaurant nor as a tourist magnet. Instead, it was intended to be a powerful broadcast tower for the increasing telecommunications signals.

Until the early 1960s, the space on top of the bunker on Heiligengeistfeld – a few hundred meters away from the tower – was sufficient for the necessary antennae for Hamburg’s telecommunications and the broadcast of the second and third television stations. A growing number of antennae, but also a growing number of tall buildings that literally stood in the way of radio waves, forced the responsible German postal service to build the TV Tower, which was constructed with an observation deck and a restaurant at the request of the urban planners in Hamburg.

An entertaining short film full of anecdotes about the rotating restaurant can be found here.
The video is only available in German.

Three years separated the laying of the foundation stone in April 1965 and the official opening of the tower – which cost 57.2 million deutsche mark (approximately 28.5 million euros) – on May 1, 1968. In January 2001, the restaurant and observation deck had to be closed due to asbestos contamination. No new operators could be found following renovations, so the space lost its grandfathered status due to the refurbishments and the long-lasting vacancy. Stricter fire safety provisions in particular made comprehensive and expensive improvement work necessary, which made the search for tenants especially difficult.

With its partners Ramp106 and Home United, HMC is planning to operate the Hamburg TV Tower as an event location and observation deck again starting at the end of 2023.
© More than Sports, Gertje König

By now, 37 million euros in funding – provided by the federal government and the Free and Hanseatic City of Hamburg in equal halves – is available for the installation of new elevators and the refitting of the tower to comply with the applicable fire safety regulations. In June 2020, it could finally be announced that – beginning in 2023 – Hamburg Messe und Congress will operate and manage the tower together with the organizers of the OMR Festival, Ramp106 GmbH, and Home United, a project developer for joint infrastructures.

What they all have in common is that they are headquartered in Hamburg, quite close to the “Telemichel.” Under the umbrella of a joint venture, the partners will return the Heinrich Hertz Tower to its former glory as an attraction for the public in the Hanseatic city. The stated objective of this three-pronged partnership is to tap the potential of the reactivation of the landmark, both for the citizens of Hamburg as well as for visitors to the city. In addition to the reopening of the observation deck for public visits, it is also important to the three partners to enable flexible use for a variety of content for different target groups.